Pingalwara – A Home for the Homeless

A nations’ strength is not found in its treasury statement. It lies instead in the character of its people, in their willingness to sacrifice leisure, comfort and a share of their talents for the welfare of their nation. The family is the basic unit of our society, it is there that the responsibility begins. Today with the materialistic outlook which our society has acquired, the family ties are under a lot of stress and strain. The family as a cohesive unit is breaking up. A family is no longer a group whose members depend upon each other for companionship, support, love and affection. The urge of each individual to pamper his own wants has placed emphasis on selfishness. 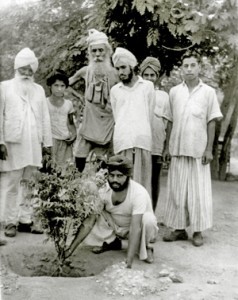 He urged everyone to plant more trees

Every society has its share of its unfortunate individuals who are sick, disabled, forlorn, suffering and deserted by mankind. There are old people and new born babies no one wants to look after. There are disabled who are not admitted into any of the hospitals and are left to die on the roadside. There are diseased persons no one wants to touch. They all are the burden of our society but who is to look after them ?
95 years ago, a massiah named Ramji Das who later became Bhagat Puran Singh, came into this world. He started a movement which was totally new in conception. This was no easy task. For fourteen long years he carried a spastic child on his shoulders as they had no place to stay. This was a period of his baptism. He achieved godliness through his love for the human beings.
The journey was arduous and painful. But single handed, toiling day and night, in scorching heat and biting cold, in rains and thunderstorms, undeterred by adversaries, undaunted by criticism, he continued to pick up these wretched, dying, dirty, infectious creations of God from wherever they could be found.
Pingalwara is not an institution, it is a dynamic movement. Bhagat Ji did not lay down a number of pre-determined tasks: he propounded a philosophy which is the foundation of Pingalwara and covers the entire spectrum of social problems of our society.

The donations made to Pingalwara are exempt from Income Tax under Section 80G of I.T. Act. 1961
Donations to pingalwara can be made through cheque/ demand draft in any currency in the name of  ‘All India Pingalwara Charitable Society (Regd.) payable at Amritsar’. Donations in Cash are accepted in any of the Pingalwara branches.

Please address your donations to:

Sentence “You are going with whom?”